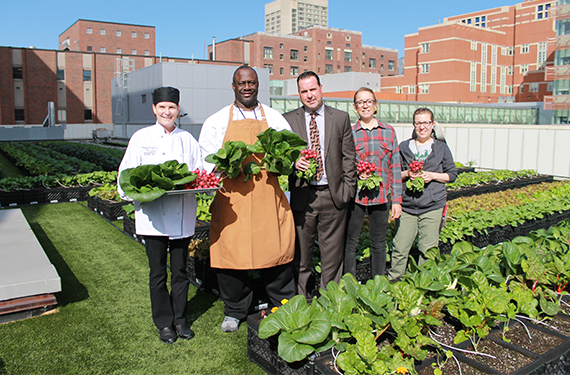 Practice Greenhealth members were featured in “A profitable prescription: More US hospitals are going green to keep them out of the red” on the front page of USA Today.

The Aug. 10 article highlights how a growing number of health care systems are adding environmental improvements, which are reducing costs.

“We’re saving $1 [million] to $3 million a year in hard cash,” said Jeff Thompson, the former CEO of Gundersen Health System in La Crosse, Wis., the first hospital system in the U.S. to produce more energy than it consumed back in 2014. “There are multiple examples – at Gundersen and other places – where, if we’re thoughtful, we can improve the local economy, lower the cost of health care and decrease the pollution that is making people sick.”

The U.S. health care sector is responsible for nearly 10 percent of all greenhouse gas emissions.

But the article outlines how Gundersen has achieved more than a 95 percent drop in its emissions of carbon monoxide, particulate matter, and mercury from 2008 to 2016.

Boston Medical Center, another Practice Greenhealth member, analyzed its hospital for duplicative and underused space, then downsized while increasing patient capacity. The hospital now has a cogeneration plant that traps and reuses heat, saving money and emissions, while supplying 41 percent of the hospital’s needs and acting as a backup for essential services if the municipal power grid goes out.

And member ThedaCare Medical Center in Wisconsin is saving $800,000 a year (or 30 percent of its energy costs) after making changes that included retrofitting lights, insulating pipes, removing lights out from vending machines, and turning off air exchangers in parts of its building after hours.

Kaiser Permanente, also a longtime Practice Greenhealth member, aims to be carbon-neutral by 2020, mainly by incorporating solar energy at up to 100 of its hospitals and other facilities. One in use at its Richmond (Calif.) Medical Center is credited with reducing electric bills by $140,000 a year.

Energy use accounts for 51 percent of spending within facility expenses so even modest cuts are “significant,” said Kara Brooks, sustainability program manager for the American Society for Healthcare Engineering.

As the article states, Practice Greenhealth estimates its members average about $1 million a year in savings.