Dignity Health to Divest from Coal and Invest in Green Investments

During the recent COP21 climate negotiations in Paris, France, Dignity Health announced it is divesting from thermal coal companies, expanding sustainable investments, increasing its use of renewable energy, and reducing its greenhouse gas emissions. Read more about this moral leadership action.

This announcement stands as one of the most significant moments in the climate and health movement this year. Every health system and clinician that is concerned about the health impacts of climate change should take notice. Here’s why:

Coal combustion is the single largest contributor to climate change in the United States.  It releases a toxic soup of chemicals—such as nitrogen oxides that contribute to smog, mercury, and particulate matter—that together damage the respiratory, cardiovascular, and nervous systems and contributes to heart disease, cancer, stroke, asthma, and chronic lower respiratory disease.

Dignity Health is the first health system in the United States to develop a screen to divest its holdings in thermal coal companies. In the 1990’s, Dignity Health (then called Catholic Healthcare West) took a similar moral leadership action when it stopped investing in tobacco.

Leaving Fossil Fuels In The Ground Will Protect Our Health

There is increasing international recognition that we must limit global temperature increases to 1.5 degrees Celsius to avoid catastrophic consequences to the climate. It is estimated that to accomplish this, we must leave two-thirds to three-quarters of fossil fuel reserves in the ground.

Dignity Health did not become a climate champion overnight.They have been at it for over 20 years and have worked diligently for many months to develop and launch their new investment policies. Now is the time for other health systems to follow Dignity’s lead and screen out fossil fuels like coal from their portfolios, align their mission to heal with their financial investments, and pledge to cut greenhouse gas emissions. 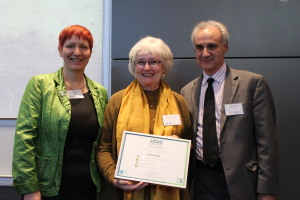 Dignity’s accomplishments as a climate champion are an example of what’s possible when the healing mission and values of a health system help drive policy. As Susan Vickers, RSM, vice president of corporate responsibility at Dignity Health stated, “With roots in the Catholic tradition, we are proud of our comprehensive efforts to address climate change as a moral responsibility to protect the planet and create a safe living environment. We will continue advocating for aggressive strategies that will directly reduce the risk to public health. We hope our actions will inspire other health care organizations to reevaluate their environmental policies.”

For more information about how your hospital can address climate change, contact Eric Lerner at Elerner@HCWH.org.